Email. The most common means of internet communication, that has been around for ages and nobody has been able to replace it. And yet, it is so hard to get it right in terms of configuration so that messages don’t get sent in spam.

Setting up your own email server is a nightmare, of course, but even cloud email providers don’t let you skip any of the steps – you have to know them and you have to do them. And you if miss something, business will suffer, as a portion of your important emails will get in spam. The sad part is that even if you get all of them right, emails can still get in spam, but this is on the spam filters and there’s little you can do about it. (I dread the moment when an outgoing server will run the email through standard spam filters with standard sets of configurations to see if it would get flagged as spam or not)

This won’t be the first “how to configure email” overview article that mentions all the pitfalls, but most of the ones I see omit some important details. But if you’ve seen one, you are probably familiar with what has to be done – configure SPF, DKIM and DMARC. But doing that in practice is trickier, as his meme implies: 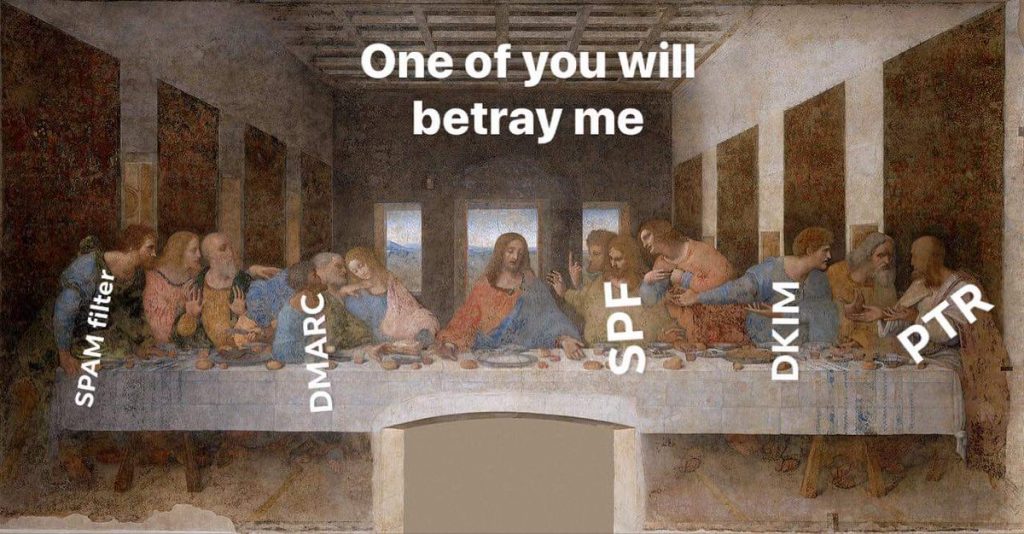 So, you have an organization that wants to send email from its “example.com” domain. Most tutorials assume that you want to send email from one server, which is almost never the case. You need it for the corporate emails (which would in many cases be a hosted or cloud MS Exchange, or Google Suite), you need it for system emails from your applications (one or more of them), which use either another internal server or a cloud email provider, e.g. Amazon SES, you also need it for your website, which uses the hosting provider email server, and you need it for your email campaigns, e.g. via Mailchimp or Sendgrid.

All of the email providers mentioned above have some parts of the picture in their documentation but it doesn’t work in combination. As most providers wrongly assume they are the only one. Their examples assume that and their automated verifications assume that – e.g. Microsoft checks if your SPF record matches exactly what they provide, rather than checking if their servers are allowed by your more complex SPF record which includes all of the above providers.

So let’s get to the individual items you have to configure. Most of them are DNS records, which explains why a technical person in each organization has to do it manually, rather than each service pushing it there automatically after some API authentication:

After everything is done, you can run a spam test using some of the available online tools: e.g. this, this or this. And speaking of tools, MXToolbox has many useful tools to verify all aspects of email configuration

By now (even if you already knew most of the things above) you are probably wondering “why did we get here?”. Why do we have to do so many things just to send simple email. Well, first, it’s not that simple to have a universal messaging protocol. It looks simple to use and that’s the great part of it, but it does hide some complexities. The second reason is that the SMTP protocol was not designed with security in mind. Spam and phishing were maybe not seen as such a big issue and so the protocol does not have built-in guarantees for anything. It doesn’t have encryption, authentication, non-repudiation, anything.

That’s why this set of instruments evolved over time to add these security features to email (I haven’t talked about encryption, as it’s handled differently). Why did it have to be DNS-based? It’s the most logical solution, as it guarantees the ownership of the domain, which is what matters even visually to the recipient in the end. But it makes administration more complicated, as you are limited to one-line, semicolon or space separated formats. I think it would be helpful to have a way to delegate all of that to external services, e.g. by a single authenticating DNS record which points to a URL which provide all these policies. For example an EML record to point to https://example.com/email-policies which can publish them in a prettier and more readable (e.g. JSON) format and does that in a single place rather than having to generate multiple records. Maybe that has its own cons, like having the policy server compromised.

But if anything is obvious it is that everything should be designed with security in mind. And every malicious scenario should be taken into account. Because adding security later makes things even more complicated.